Crafted with love by Madhu Menon

A year after the military defeat of the LTTE, Sri Lanka is faced with the challenge of moving from its current post-war state to a post-conflict one.  This entails that the sources of the conflict that plagued the country for over three decades are not sustained and reproduced. The priorities should be: peace via a political settlement; reconciliation through ameliorating the plight of the Internally Displaced Persons; the reversal of the culture of impunity promoted by human rights violations; and promoting unity by resisting the assertion of majoritarianism.

However, current government policy is on a different trajectory, in which economic development is posited as the panacea to achieve peace, reconciliation and national unity. In this perspective, economics is not only given precedence over politics but it is assumed that economic development will blunt political aspirations and grievances. Civil and political rights are at best considered irrelevant or of secondary importance and in extreme cases, downright subversive. In pursuing economic development with the same single-minded purpose it pursued military victory, the Rajapaksa government also intends to change the political culture of the country from the more boisterous and pluralistic one shared with India—characterised by an implicit faith in democratic norms and traditions—to a more disciplined and monolithic one along the lines of some South East Asian states, with their over-emphasis on the economic and suppression of the political.

While the end of the war has ensured an increase in economic activity, it is by no means assured that the expected post-war boom will underpin the government’s ambitious plans to make Sri Lanka a key economic hub of South Asia. The economic developments projects for the North and East, designed and implemented from Colombo with little or no local consultation, arouse suspicions about attempts to change the demographic composition through majority community colonisation in the guise of development. The emphasis is currently on tourism and infrastructure, with considerable dependence on Chinese and Indian assistance and investment. The government has also taken a substantial IMF loan which entails considerable reduction in the budget deficit and public spending as well as the re-orientation of economic ties towards Asia’s emerging powers. 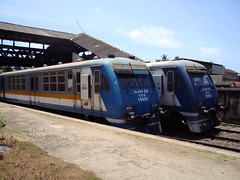 There appears to be no urgency with regard to a political settlement of the ethnic conflict. The recent focus of constitutional reform has been on the removal of the two six-year term bar on the executive presidency. A resolution of the ethnic conflict revolves around the scheme of provincial devolution ushered in by the Thirteenth Amendment to the Constitution following the India-Sri Lanka Accord of 1987. Despite preliminary talks between the regime and the main Tamil party, the Tamil National Alliance, there has been little progress on the subject of devolving more powers to the provinces within a united Sri Lanka and its current unitary constitutional framework.

The situation of the IDPs, though far removed from their incarceration in camps in tens of thousands immediately after the war, is far from settled.  Some 30,000 out of the initial 300,000 still remain in camps along with another 10,000 surrendered fighters, who have been denied access to the international Red Cross. The majority of those let out of the camps is in transit camps and host families, since its return to homes is hampered by the slow pace of de-mining operations, establishment of military high-security zones and problems related to proof of land ownership.

The government’s unwillingness to reverse the culture of impunity in dealing with human rights violations—fuelled by allegations of war crimes by both sides in the last days of the war—is at the heart of the criticisms leveled against it by local and international civil society organisations.  The UN Secretary General has set up a panel to advise him on this issue in the face of strident objections from the Rajapaksa government. A leading cabinet minister led an attempted siege of the UN compound in Colombo and embarked on a fast to death unless the panel was disbanded. The UN Secretary General, however, stood firm and the fast was abandoned after two days. Sri Lanka has also lost the European Union’s GSP Plus preferential trade concessions after failing to ratify and effectively implement 27 international human rights instruments and labour standards.

The Rajapaksa government’s response has been to allege infringements of national sovereignty by the West and Western resentment of Sri Lanka’s defeat of terrorism. It points out that these criticisms are unfair since it has established a Presidential Commission on Lessons Learnt and Reconciliation (LLRC). Sri Lanka, however, has a dismal past record on such commissions. Their reports are neither made public nor their recommendations adopted.  This has been the case with at least two high profile commissions on human rights violations in the last five years. One of them had an international panel attached to it, which quit in frustration after identifying the Attorney General’s  (AG) office—the AG headed the LLRC—as a key obstacle to their work. The current LLRC has neither any investigative powers nor a witness and victim protection scheme.

The regime’s hyper-sensitivity on the issue of accountability is a major driver of its closeness to China, Russia and Iran. This has raised questions about Beijing’s intentions in the Indian Ocean region and of Sri Lanka being turned into the site of Sino-Indian strategic competition. Notwithstanding the attempts to downplay the same, India’s role remains pivotal to the process of a political settlement of the conflict. The Rajapaksa government, for its part, has steadfastly maintained that its relations with Delhi are founded on age-old cultural bonds and geo-political realities whereas Chinese interests in Sri Lanka are economic—assistance for infrastructural development—rather than military.

Peace without unity, unity without reconciliation, and reconciliation without accountability—these are the dilemmas that both the regime and society will have to bridge if Sri Lanka is to fully grasp the historic opportunity presented by the end of the war. Only then can Sri Lanka transform from a post-war environment to the post-conflict period of growth and reconciliation.