Crafted with love by Madhu Menon

If there was one big message from this year’s Shangri-La Dialogue, the annual Asian security conference held in Singapore, it was the quiet burial of the G-2. Last year’s exuberance surrounding the idea that the United States and China could attain seamless geopolitical co-operation on diverse issues has finally been overwhelmed by a realistic re-assessment by Washington.

What explains this new image of US-China relations? First, it is now clear that China misperceived the US quest for a broad-based co-operative entente as a sign of weakness, which emboldened an already confident Beijing to assert itself diplomatically. To be sure, the West’s narrative for a G-2 itself was flawed, since it was based on the naïve assumption that a US-China partnership could be constructed without actually ceding strategic space to a rising China, especially in the Western Pacific. The Chinese, while they relished the accommodative ‘Chimerican’ spirit of Obama’s first year in office, were unwilling to actually expend resources and diplomatic capital on solving questions that were viewed as inherently American problems: Afghanistan, Iran, North Korea, economic imbalances, climate change, etc.

Second, it seems that the post-economic crisis phase has affected the internal balance of influence on US’s China policy. The Obama administration appears to be rebalancing its China policy, which until the financial crisis was dominated by a coalition of business and financial interests, towards a more co-ordinated approach that now includes the security community or the Pentagon as a growing stakeholder. Arguably, the first group’s bargaining power has diminished within the US national security hierarchy.

Further, given the national imperatives of reviving growth across the world economy where states like the United States, China and others are scrambling for new export markets, including market access vis-à-vis each other, to raise aggregate demand and employment at home, it is unlikely that the pre-crisis equilibrium of China exporting its way to glory can be restored. In sum, competition in the economic sphere has added a new dimension to Sino-American interactions.

The elevation of the US military establishment as a growing voice in US-China relations was signaled by the relative firmness that Washington recently showed on issues such as arms sales to Taiwan, which despite being an old question was initiated to dispel Chinese perceptions of a major global power shift that entitled Beijing to assume a more active foreign policy. For example, this March, it was reported that Chinese officials told two visiting senior US administration officials that China would not tolerate any interference in the South China Sea, labeling it for the first time as a “core interest” for China. Beijing seems to be probing to discover if it can extract greater space from the United States in East Asia and the Western Pacific, but Washington has so far been unwilling to accept a change in the status quo.

Finally, the complexity and geopolitical plurality across Eurasia, which includes other important actors like Russia and India, along with the latent and open contradictions between the US and China have altered the trajectory of US-China relations and devalued its supporting G-2 narrative. The US-China equation has now reverted to one based on the actual balance of power between the two sides.

This was the general backdrop to this year’s Shangri La conference. 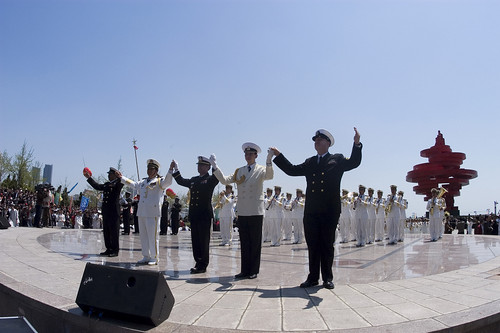 The Cheonan incident—where a North Korean submarine allegedly sunk a South Korean warship earlier this March in disputed waters in the Yellow Sea between the two Korean rivals—added another layer of dissonance in North East Asia. Regional alignments appear to have been reinforced by the Cheonan incident. Continental China was impelled to support its North Korean strategic buffer and the frontline maritime states rallied with the US.

The drift in US relations with Japan and South Korea has also been broken and both allies have sought to reaffirm their security arrangement with Washington. Washington also found an opportunity amidst the tension in the Korean peninsula to reinvigorate its alliance structure in the region. Robert Gates, US defence secretary, while emphasising America’s “Pacific” roots also vowed to “deepen and expand” its “alliances and partnerships” including an assurance on the durability of America’s extended nuclear deterrence. On China, Mr Gates defended arms sales to Taiwan as being consistent with Washington’s one China policy and a natural response to China’s “accelerating military buildup” that “is largely focused on Taiwan”. He explicitly blamed Beijing for the recent impasse in bilateral military ties (Mr Gates was denied an invitation to visit China during his Asia tour).

China’s representative at the conference, Lieutenant-General Ma Xiaotian, deputy chief of the general staff of the People’s Liberation Army, presented the Chinese rebuttal, which put the onus back on Washington for deteriorating military-to-military ties. General Ma, in a thinly veiled reference to Washington, noted that “a Cold-war mentality still exists, as is often shown by efforts to strengthen military alliances via new technologies, the threat to use force in international relations…if anyone has been setting up barriers to co-operation, it is certainly not us”. He singled out arms sales to Taiwan and “the intense spy and patrol behaviours of US planes and ships in South China Sea and East China Sea” as the main obstacles to Sino-US military cooperation.

The Chinese are apparently on the defensive and seem to be concerned about a renewal of the “China threat” theory across the region. But this raises the question: was it not China that decided to challenge Deng Xiaoping’s mantra of maintaining “humility” and becoming too eager to gain the spotlight?

Geopolitical flux
Shiv Shankar Menon, India’s national security advisor, captured the contemporary power transition when he remarked that “Asia is witnessing the simultaneous rise of several powers, each convinced that its position relative to the others will improve rather than worsen in years to come.”

There are three trends worth tracking. First, a direct outcome of Shangri La 2010 is the ASEAN Defence Ministers’ Meeting-Plus 8 (ADMM+8): The gathering of ASEAN defence ministers and their counterparts across the Asia-Pacific—US, Russia, China, India, Japan, South Korea, New Zealand, and Australia—this October in Hanoi will be an important step in the process toward evolving an inclusive security architecture for Asia. The proposal is for the group to meet every 3 years. ASEAN’s neutrality and it geopolitical location on the cusp of the Indian Ocean and Pacific regions has made it the natural fulcrum for evolving pan-Asian institutional arrangements and Mr Menon was positive on this point.

Second, the military balance in the South China Sea: China’s efforts to push for more geo-strategic space in the first island chain—comprising Japan, South Korea, Taiwan, and the Philippines, where the majority of US commitments hinge and forward bases including 70,000 US troops are located—will bring friction with the United States in the Western Pacific. In recent years, China’s military doctrine has been laying a greater emphasis on developing asymmetric capabilities that are premised on constraining and denying US power projection and military access into the South China Sea as well as targeting key US bases in South Korea and Japan. Consequently, a change in the regional military balance is likely to persuade China to seek a larger role in the Western Pacific. The United States, however, appears unwilling to contemplate a change in the status-quo. How both sides manage this growing security dilemma will directly impact the Sino-American equation and the overall security environment in East Asia.

Third, is the geo-economic flux: Though as a more medium-term trend, the nature of the global recovery—whether Asian economies can rebalance their export dependence on Western consumer markets by increasing intra-Asian trade and indigenous aggregate demand—will shape the overall relationship between China and its periphery. If an economic “de-coupling” scenario does begin to develop, it seems reasonable to project that regional foreign policies will reorient toward a new posture.

Relative power shifts invariably influence threat perceptions and even exacerbate the security dilemma between states. It is during such a period of adjustment—the search for a new status quo—that the shadow of conflict is always in the foreground. While institutional arrangements have never prevented inter-state conflict, their role as a mechanism to reassure and address conflicts of interests cannot be discounted.

“Whether Asian states will be able to build such a security architecture,” as Mr Menon remarked, “will be a real test of our wisdom and skill”.